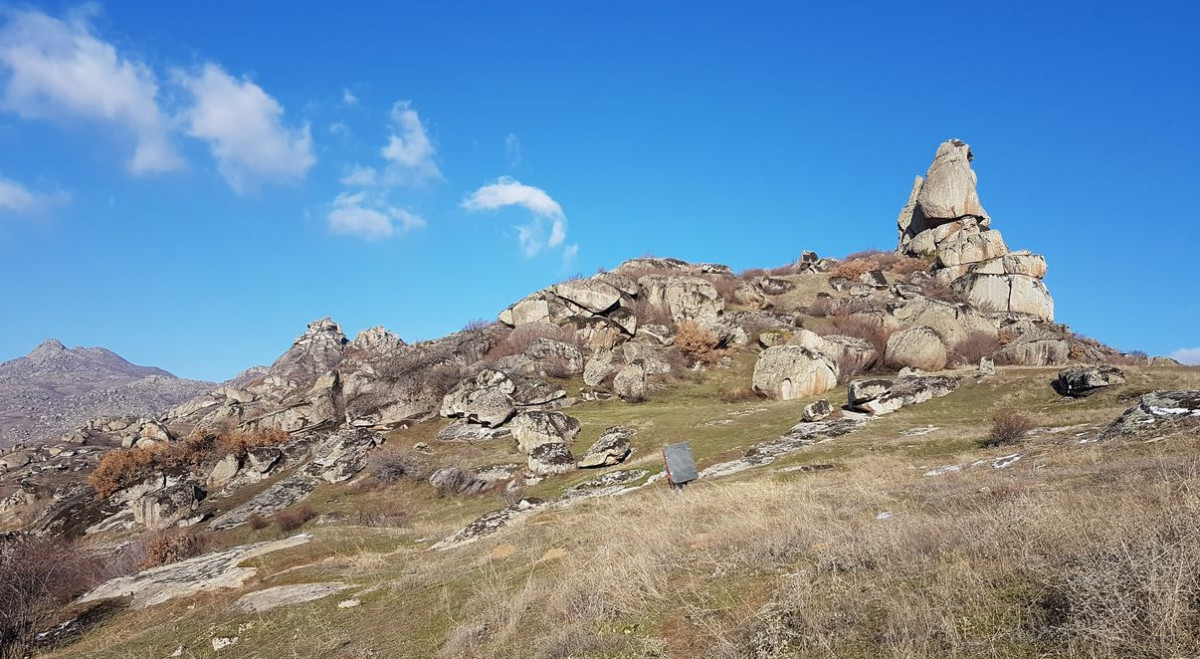 Prilep is one of the biggest developed bouldering areas in the Balkan. The crag and the whole area is a surprisingly good climbing destination for beginners and pro climbers as well. The city of Prilep lies in a lowland surrounded by hills. The feeling is mediterranean, as the vegetation is poor on the hillsides, you can see thousands of boulder blocks everywhere.

The area has a unique atmosphere with the special Balkan-spice, friedly locals, good foods and super cheap prices. The city of Prilep – also called the Macedonian tobacco and beer capital – offers us several cultural and historical sights as well, besides the amazing landscape. Climbing started here around 2003, when a group of Slovenian climbers started to clean new boulders on the huge granite blocks over the tobacco fields of the city.

The rock is large grain granite or gneiss depending on the sector, with relatively good quality. There are some weaker material sectors, but the higher sectors on the hill have good rock quality. The texture is pretty rough, crimpy holds can be sharp and the slopers are usually have awesome friction with a potential skin-trimming factor. In average it’s not so tough as in Targasonne for example, so if you pay attention on your skin, climbing several days in a row is possible, especially in the colder winter months.

The style of climbing is mostly crimpy and requires finger strength, but quite many boulders have nice slopers and huecos, for example boulder Alien (7b) in sector Sisernik. The majority of the routes are vertical or slightly overhanging, but there are a bunch of nice overhangs and roofs as well, like Batman (8a) in Balvanija sector or Legoland (6b+) in Baba sector. Landing is mostly flat and easy, climbing alone is also possible. However, there are some classic highballs where 2-3 crashpads and a spotter is the minimum. Petzl Roc Trip visited Prilep in 2014, the video gives a good insight of climbing in this amazing crag. 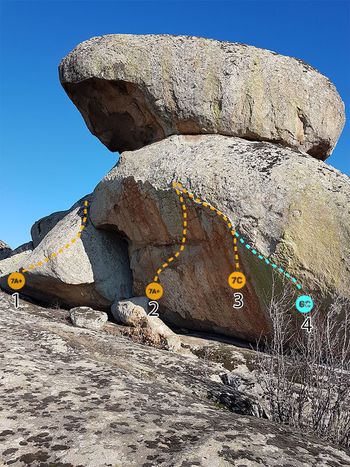 Another unique feature in Prilep is the incredibly huge potential of opening new lines! As you walk in the sectors, you can open a new boulder literally every place where you drop down the crashpad. The opened routes can be around 1% of the potentially existing boulders in the crag. So if you are motivated to open new lines, prepare your climbing gear and start your trip immediately :) And don’t forget to bring your soft metal brush to clean the rock and the pruning shears, to cut the small bushes under the blocks.

Summers in this part of Europe are way too hot for climbing. The orientation of the boulders are mainly south/west, what means ideal climbing conditions in all seasons except summer. From the end of September until the beginning of May the temperature is proper for climbing, although if you are looking for the best friction, autumn and spring can be warm. The amount of sunny hours is high even in January and February, so a winter trip can be a good choice if you like to boulder in 0-5 degrees and sunshine.

As we mentioned before, Macedonia has really low prices comparing to the EU. It’s worth to book in a hotel, a double room is around 20-30 EUR per night in the city centre. Restaurants also have a really good price/value ratio, it’s hard to spend over 20 EUR for a satisfying dinner for 2 person. Our recommendation is Restaurant Makedonska Kuka with awesome foods, kind english-speaking staff and menu and private parking for the car. The local beer called Zlaten Dab is absolutely worth to try (and also the name of a super 8a boulder in Dabnica sector, opened by Dani Andrada).

Prilep has a typical Balkan old town with a big main square surrounded by shops and cafes. The local men are sitting in these places spending the whole day with black coffee, tea and talking. If you like to visit cultural sights, you can take a walk up to the hill above to city to see the ruined hilltop fortress called Markovi Kuli (Marko’s Towers). This area is a sector as well, where you can climb the boulders just above the last houses, with a beautiful view to the city. At half way to the top there is the Monastery of Holy Archangels, which dates from the 10th century.

Just a few kilometers away from the city there is another monastery called Treskavec Monastery. Worth a visit and a climbing day – this is also a beautiful sector as well. The blocks are just at the side of the monastery.